Written in August 2008 and first posted on MyT. 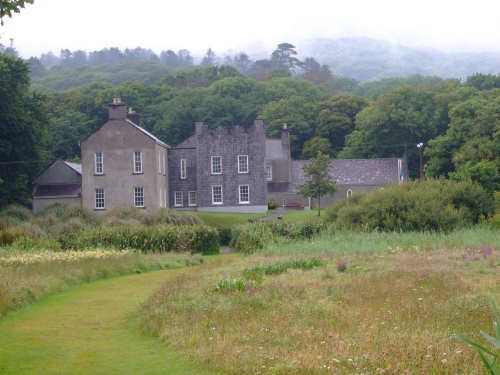 This is Derrynane House in Co. Kerry, the home of the radical Irish political leader Daniel O’Connell (1775–1847) and now a kind of museum to him, which I visited recently. END_OF_DOCUMENT_TOKEN_TO_BE_REPLACED

There are some good quotes about the prominent politician Patrick Duigenan (MP for Old Leighlin and Armagh City): Sir Jonah Barrington said that he was ‘always at open war with some person, during the whole course of his public life … he considered invective as the first, detail as the second, and decorum as the last quality of a public orator and he never failed to exemplify these principles’. Henry Grattan considered that Duigenan’s speeches inflicted a double injury, ‘the Catholics suffering from his attack and the Protestants from his defence’. John Philpot Curran said that Duigenan’s speeches were ‘like the unrolling of a mummy – nothing but old bones and rotten rags’. END_OF_DOCUMENT_TOKEN_TO_BE_REPLACED

Intent on being intense, she’s a ferally attractive
Leopardess from nights of yore;
Tail a-swaying, captive geese a-laying,
Crystal bowls refractive of my lust for lore.
We have goldfish to fry, mullet to misidentify
As Liffey salmon, strings to strum and cords to sever
(Those things can wait for now … and possibly for ever.) END_OF_DOCUMENT_TOKEN_TO_BE_REPLACED

Michael Hartnett was a poet and translator from Croom, Co. Limerick (where I was born) who had a great way with language – Irish, which he preferred, as well as English. He was a harsh critic of the mores of the Irish state – particularly its failures in relation to the language and culture – and of what he saw as bourgeois complacency and mediocrity. His own culture was a very old one.

Hartnett lived in Madrid (he was a great admirer of Lorca), London and Dublin before returning to his base in rural Limerick, and translated poetry from Hungarian as well as seventeenth-century Irish. END_OF_DOCUMENT_TOKEN_TO_BE_REPLACED

My wife and I walk the dogs nearly every day. We have two routes … the one shown here is perhaps less photogenic, as it doesn’t have views of the Lough Crew Hills, but never mind.

Some years ago I wrote a long article based on material I was working on at the time, concerning the eighteenth-century Irish parliament. I posted various extracts from it on MyT; here is one. There will be others.

The standard of wit and invective was often very high among members of the eighteenth-century Irish parliament and their contemporaries, even though a careless insult might result in a duel – perhaps the members avoided insulting the best shots. The language used, whether to praise or to deplore, was far more expressive than any politician could manage today. END_OF_DOCUMENT_TOKEN_TO_BE_REPLACED

Cary Grant’s press agent grew tired of being asked Grant’s age. In reply to a telegram ‘How old Cary Grant?’ he wrote ‘Old Cary Grant fine. How you?’

On the breezy beach I met her, long ago
Waves in every letter of the name she sent me,
And in the sheets she lent me, which smelt of some essential oil –
A flower I didn’t know back then …
Embellishing girls’ beauty; a mystery to men. END_OF_DOCUMENT_TOKEN_TO_BE_REPLACED

Tagged as shells, the sea

The following are photos taken by my wife on a trip to the Skelligs, off the Kerry coast, in August 2008. Since then, two tourists have died in falls there. I posted the text that follows as a MyT blog.

END_OF_DOCUMENT_TOKEN_TO_BE_REPLACED

Leaving behind us the alien, foreign city of Dublin
My father drove us through the night in an old Ford Anglia,
His five-year-old son in the seat beside him,
The rexine seat of red leatherette,
And a yellow moon peered in through the windscreen.
‘Daddy, Daddy,’ I cried, ‘Pass out the moon,’
But no matter how hard he drove he could not pass out the moon. END_OF_DOCUMENT_TOKEN_TO_BE_REPLACED