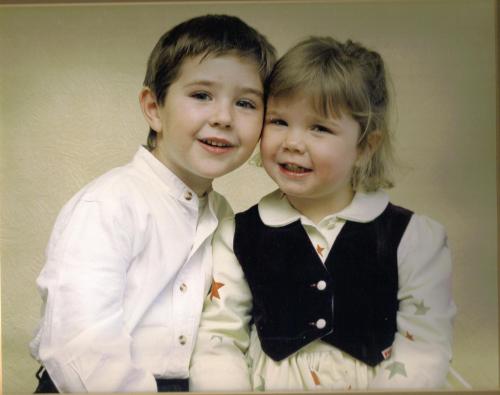 2/12/97 – Sean and I played Hover – I regained the high score then he got an even higher one. I think he’s clever to be able to play it so well, and it’s good for his spatial skills and hand–eye coordination. He’s playing the harmonica a lot, and wants to take lessons. He says it makes him feel good, as if he’s cuddling us, because we gave it to him. Pauline told him about people playing harmonicas in gaols etc., which impressed him … [later] She read children’s stories about Brahms and Tchaikovsky as boys to the kids’ Sean again was most impressed and wants to hear music by Brahms.

5/12/97 – Eleanor and Alan were here in the afternoon and Sean had a good time playing with Alan.

6/12/97 – Pauline took the kids to speech & drama … she took Sean to his swimming lesson. Sean and Susanna went to Olivia’s party in the afternoon … we all went to Sean’s football match. His team, Albion, beat Inter 2–1, which was nice for him after two defeats. END_OF_DOCUMENT_TOKEN_TO_BE_REPLACED

… and thanks to everyone who has commented on this blog during the year. In particular I must mention Cymbeline and PapaGuinea, who have been great online friends to me. I hope we will all have a great 2012. 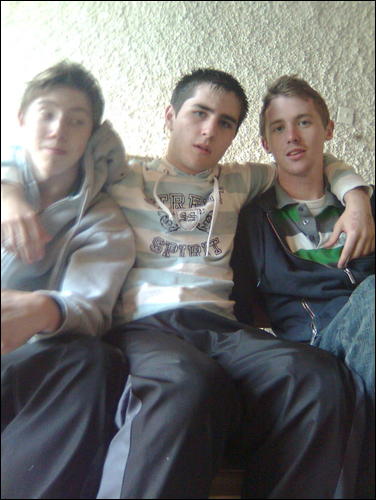 Sean at school with his friends Aaron Q and Mike

Sean had a desk diary for 2007. He left it blank except for two items – near the back is a detailed account of a new sport Sean had invented, called ‘Kones’ – with diagrams, rules, projected world rankings, major championships and leagues, and top players. It seems a bit similar to American football.

Sean wrote the following on 22 January. He was 15 at the time.

One month get fit plan

1/3/98 – I sat in Bewley’s for quite a long time, drinking coffee, and overheard a sad conversation – a father and his son, whose other son/brother is missing, were getting details of this man’s last known movements from his girlfriend … [later] While Susanna was in the bath this morning she said to Pauline ‘I think I’ll write a film’. Pauline said ‘What will you call it?’, and Susanna replied ‘Dirty Water’.

8/3/98 – I took Sean and Susanna to Andy’s party … They had done their own cards. Sean’s showed his surreal sense of humour. A man eating at a table says ‘I love cabbage – but there’s two fish in the room.’ One lifts a flap to reveal two large kissing fish.

9/3/98 – I collected Sean from school – all the way home he related the story of St Patrick to me, Mr Neary having told it in great detail. ‘Did you know that he was chased down the road by pirates?’, etc. END_OF_DOCUMENT_TOKEN_TO_BE_REPLACED

The only Snow Patrol song I really remember listening to with Sean is the classic ‘Chasing Cars’, which he must have put on a compilation CD as I remember driving up our road with it playing loud, and Sean singing in the passenger seat. We bought him a Snow Patrol CD a few Christmases ago but I don’t think any of us listened to it much. This song reminds me of him. END_OF_DOCUMENT_TOKEN_TO_BE_REPLACED

I love this photo, taken on the occasion of Pauline’s mum’s 70th birthday. It captures Sean’s attitude to life well.

Some diary entries … June to August 1998

4/6/98 – Pauline and I were worried about the length of time it’s taking our house to sell – RG has three more people lined up to see it on Saturday.

5/6/98 – I took Sean and Billy to the end of the road for football, and they ended up playing in Stephen’s house for a while.

6/6/98 – I took Sean, Susanna and Olivia to the end of the road to play football, and we met up with Stephen.

7/6/98 – In the afternoon we all went to the Botanic Gardens, which was having an open day. The kids had good fun, with face-painting, a nature trail, etc. END_OF_DOCUMENT_TOKEN_TO_BE_REPLACED