Sean liked Jimmy Cliff as part of his general fondness for Jamaican music. The first clip in his YouTube ‘favourites’ is ‘The Harder They Come’ (I don’t know whether he ever watched the movie of the same name). His downloaded music includes the Cliff tracks ‘Many Rivers to Cross’, ‘The Lion Sleeps Tonight’, ‘Vietnam’ and ‘Wild World’, as well as ‘The Harder They Come’ (Cliff’s version of ‘Wild World’ was on the CD that Clio made to be played at Sean’s wake). He especially admired Cliff’s stunning performance of ‘Many Rivers to Cross’ on a ‘Hootenanny’ edition of Jools Holland’s Later from 2003 or so, and often mentioned it to me. END_OF_DOCUMENT_TOKEN_TO_BE_REPLACED

In the past couple of years, Sean started to listen to a lot of reggae music; Bob Marley (and the Wailers) became the last and greatest musical love of his life. He found plenty of early and obscure stuff online; much of this was better, we felt, than Marley’s later, more ‘produced’ and more commercial output.

Sean admired Marley as a person … the football skills, the voice, the song-writing talent, the social conscience, the independent attitude, the single-minded pursuit of his vision. Marley is one of the all-time musical greats, and listening to the tracks Sean played was no hardship for me or his mum (she had Wailers records when she was Sean’s age, and we went to many reggae gigs when we first lived together). END_OF_DOCUMENT_TOKEN_TO_BE_REPLACED 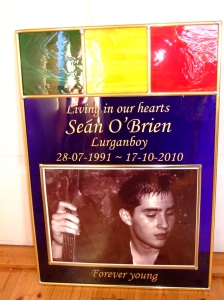 Pauline designed this marker for Sean’s grave … a colleague of hers was kind enough to make it. The green, yellow and red symbolize Sean’s love of reggae. It will be placed in a double-glazed unit with a wooden frame.

Tonight is a big night for us … Sean’s month’s mind mass. Many relatives and friends are travelling to be here. We’ll be going to the pub afterwards, and there will be music … I may sing a Bob Marley song or two depending on how the night goes.

Filed under Death, The music of what happened