Six days and nights in Palma 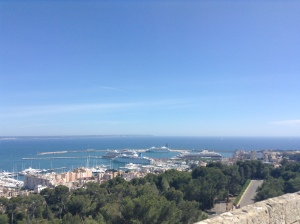 The swifts speed, chase and soar above Carrer d’Arabi in the warm afternoon; conversation rises from the café tables in the street to our apartment on Carrer de la Confraria de Saint Miquel.

Earlier a busker strummed his guitar hard and sang in Spanish or maybe Catalan: I could not distinguish the words coming in the window. Then an accordionist played ‘Those Were the Days’, ‘Roll Out the Barrel’ and ‘When the Saints Go Marching In’.

We walked around the town, listening to Senegalese music or reggae. Other street performers are elaborately dressed and perfectly still, or appear to levitate as they sit by a pole.

We went to Palma beach and then had a meal at a restaurant where the proprietor was extremely friendly, and gratified that Susie had kept last week’s promise to bring her parents. He showed us all a photo of his son, who lives in England, as a suitable boyfriend for Susanna. He was mortified then to hear, on enquiring about our other children, that we had lost our own son – Pauline showed him a photo of Sean. As we left he was still apologizing unnecessarily for being ‘insensitive’. The food was excellent, as was the proprietor’s English.

Pauline went to Plaça d’Espanya to meet Susie by the equestrian statue of some conquistador and go looking for mole paste. Victor needs it for the chilli he will cook for us tonight in Susie’s apartment.

I can see the mountains, away past the rooftops. On the corner of Carrer San Miquel, out of my sight, a busker plays ‘Samba Pa Ti’ on an electric guitar – I have heard him before. He has a penchant for Beatles songs, and does not sing.

On Tuesday night we went to couple of bars on La Routa, aka Tapas Tuesday. For €2 one gets a tapa and a glass of wine or beer – Pauline and I chose wine, as the quantity is the same. The bars were lively, mostly with locals. We were joined by April, Jules, Mariana, Alberto and Victor, and also met Ricky and a couple of other friends of Susie. We had bumped into Alberto in the supermarket earlier, and Guillermo on the street.

Yesterday Pauline and I bought three small pies to take on our picnic. On our asking what filling one of them had, the woman pointed to a small hole in the top through which something green could be seen. It turned out to be a pea pie.

We got a bus to Banyalbafur (‘Please require and conserve your ticket’, a sign said) and had a 90 minute hike to Port des Canonge, pies and salad on a small beach (where a man in a JCB spread seaweed, supervised by a frogman who had come out of the sea), and a hike back. The scenery was wonderful, and varied – mountains, sea, and terraces with crops. We saw five buzzards in the sky. Another day Pauline saw a lizard on the walls of Palma, which my shadow scared away.

Last night we were in Antiguedades for the third night in a row, drinking Estrella beer. The bartender is very friendly. (The first night, an African man at the bar asked me in Irish how I was.) Pauline and I had a coffee earlier in the Babel biblioteca. Last night also, Susie took us to a restaurant called Naturel that does ‘combinados’ – three small main courses on a plate with three compartments. It was very good.

Susanna tells funny stories about the small children (some as young as three) that she teaches, some of whom call her ‘Susalita’; one girl says to her ‘Hola, Susalita guapa!’ – ‘guapa’ meaning ‘beautiful’. When she walks into a class, before she has a chance to speak, they hold up their thumbs and shout ‘Fine, thank you!’ They are like miniature Spanish adults, full of gusto. The three-year-olds even do extravagant flamenco dance moves. After she told them a story yesterday, one boy made a very Spanish gesture and said ‘Perfecto!’.

Now I can hear the Spanish busker from one end of the street and ‘Can’t Buy Me Love’ from the other – an aural mess. We went by bus to the beach at Portals Nous earlier, and walked in the sea (the water was somewhat cold for swimming).

At 9.30 a.m. on Friday there was nobody on the street below – it was Mayday. At 5.30 p.m. it is deserted still: even the swifts seem less active than usual. In the meantime we hired bicycles and cycled east (the cycle lanes in Palma are good), seven miles along the coast, with Susie, Mariana, Jules, April and Victor, stopping for frozen yogurt on the way and eating pizza at the farthest point (S’Arenal) while sitting on a wall above the beach and looking across the bay to Palma. There are a lot of tourists along this strip, which is designed to cater for them. There are many parties of serious cyclists (tourists) in Majorca, on racing bikes and with all the gear.

Last night we ate at Susie’s apartment with the same five people as cycled with us today. Victor did most of the cooking – rice, chicken and mole sauce, which contains a lot of chocolate. Authentic Mexican food. We drank wine and had a pleasant evening, and stopped at the ‘local’ for a couple of Estrellas on the way home. Earlier we met Lor, our landlord, on the street and he warned us that Friday would be a holiday, so we did our shopping. In the apartment we eat bread, salads, olives, green tomatoes, hummus …

Saturday at 9 a.m. the street below is quiet again. Last night we ate in a vegetarian restaurant of which Susie had heard good things, but were disappointed with the food. We then went to the beer festival near the cathedral, which was lively, and had a couple of beers. Pauline and I finished the night off with Estrellas in our ‘local’ again.

On Sunday morning, from the window where we sit reading or drinking coffee, we can see people on Carrer d’Arabi walking about with bunches of flowers – it is Mother’s Day in Spain.

Yesterday Pauline, Susanna and I went to a gallery of modern art that had work by Dali and Picasso, then got a bus and walked up to Bellver Castle, having done some shopping and had lunch at our apartment. It was the hottest day yet, and there were an awful lot of steps to climb, but it was worth it: the castle is spectacular and has great views of the city and the sea. It was built in the 14th century but has a collection of statues from the Roman era.

On the way down we avoided the steps and got lost in the forest park. Eventually we made our way to the Avinguda de Joan Miró and had a drink in a down-at-heel bar and restaurant where the proprietor played Spanish music on a guitar while reading a magazine; a few patrons watched Cordoba v. Barcelona (Messi headed a goal while I stood at the bar) and, in one case, wolf-whistled at a woman passing on the street.

Later we went to a tapas restaurant where the food was very good, and had a couple of drinks close to ‘home’. While walking Susie home we met Mariana, Jules and Victor in Plaça d’Espanya, and she went the rest of the way with them.

Sunday was hot: we went to the Cathedral, which is beautiful, and to a local beach. Lor had said we didn’t need to vacate the apartment early; eventually we walked to Plaça d’Espanya with Susie one last time, and said goodbye to her before getting on the airport bus.

A holiday that was badly needed, and that will not be forgotten in a hurry.