Some diary entries … September to November 1993 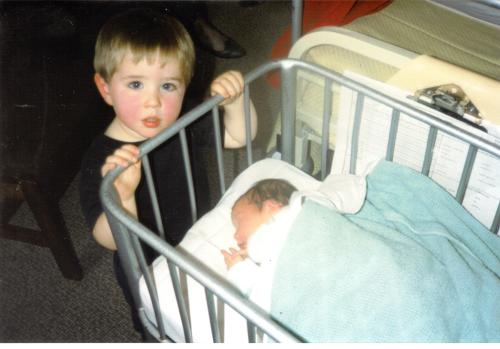 2/9/93 – Pauline left Sean to the playschool – he didn’t want to go in; she had to stay with him for a while and then sneak off. But when she collected him it turned out that he’d had a great time. He now has a schoolbag, which she bought him yesterday, for carrying his lunch in … [later] Sean and I went to the shop for sweets, him on his bike. He went to sleep quite early.

4/9/93 – Sean and I went to the shopping centre for the paper and bread, which he transported home in the tipper of his bike … [later, in Naas] We had a barbecue and wine, and John and I also drank some cans of beer. Blanaid arrived quite late with Hannah and Daniel – she and Daniel left again after a while. Sean had a good time running around with the two kids.

18/9/93 – We all went down to Dundrum. Sean went to the crèche, Pauline and I spent an hour reading the Guardian in Bewley’s. Then we did the shopping and came home, with Pauline and Sean running from one manhole cover to the next. I cooked pasta with ham etc. for dinner – Sean ate well. In general, he is still not a good eater, but shows no signs of this.

22/9/93 – Sean was awake at some unearthly hour. It seems he had bad dreams – he was talking about dinosaurs and lions eating himself and Pauline.

4/10/93 – Got a bus into town; walked from Stephen’s Green to Connolly. Soon discovered that the Belfast train was an hour late, so I strolled to Mulligan’s, had a pint of Guinness and strolled back. Met Pauline and Sean – Sean had slept a bit on the train. They had had a pretty miserable time – waiting for an hour and 20 minutes on the platform at Newry. Pauline had been freezing; Sean at least was wrapped up well.

5/10/93 – Sean slept in his own cot until after 9! This was quite amazing, and extremely welcome … Pauline took Sean to playschool in the pouring rain, and had to stay with him a while and then sneak off. She collected him in the pouring rain also – it was a horrible day.

7/10/93 – Pauline and Sean went to the ICT playgroup beside Wesley, because Sean has turned against the playschool … Triona, the prospective babysitter, called. She seems very nice.

9/10/93 – We all went down to Dundrum – Sean made friends with a black and white pussycat on the way … [later] Triona duly arrived at 8.30, and after giving her some instructions Pauline and I went out … We had two games of 10-pin bowling in Stillorgan … We had a drink in the Stillorgan House, punctuated by loud shouting from those watching the Benn–Eubank fight, then got a taxi home. Sean had half woken up at one point, but had not caused Triona any trouble.

15/10/93 – We got a bus into town and a train to Newry. Sean slept part of the way. Dave met us, and we got a bus to his house first … Sean and Sian ran around and shouted like mad things, entertaining Keelin greatly.

19/10/93 – Pauline and Sean were at the coffee morning with Marnia and Brian, and spent a large part of the afternoon in the park – Sean had a great time in the playground.

23/10/93 – Triona duly arrived around 1.45, and Pauline and I went out to catch a bus into town. Sean didn’t make a fuss, fortunately – we had been worried that he would. We didn’t sneak out; we were open about it and said goodbye. We then had a good afternoon in town … bought two pairs of plastic glasses for Sean – he had been coveting mine (30p each), and a bow and two felt arrows for £1. Got home around 6.15 – Sean had been fine with Triona. It had been a beautiful afternoon, and they had been out for a walk.

6/11/93 – Played with Sean and watched The Jungle Book (I never tire of it) before calling Pauline.

9/11/93 – Sean, Pauline and I had good fun playing – Sean and I had some rough-and-tumble on the floor, of the kind Pauline is no longer able for. She later said she’d enjoyed the evening very much.

10/11/93 – Pauline and Sean painted the livingroom side of the filled-in door.

11/11/93 – Sean had a great time in Wally Wabbit’s, playing with a young kindred spirit. Pauline made a salad for dinner and we had a quiet evening in, playing with Sean and so on. He’s in great form these days.

12/11/93 – Amazingly, Sean slept through to 8.25, so we all had a good sleep … [later] I painted the kitchen and back room ceilings, and Sean smeared some paint on the back room walls.

14/11/93 – Pauline and I started the wallpaper hanging in the back room, but were hampered by Sean and made slow progress. I took Sean to the park; Pauline went to the Nutgrove, wanting to be on her own for a while. Sean and I went to the playground, which was crowded, and had a good time. I had difficulty keeping him awake on the way home.

16/11/93 – Pauline thought that she was in labour [there is a long description of this momentous day; I’ll give just the most important part here …]. At 12.42, our baby daughter was born. We were both quite tearful, and very pleased that it was a girl. Pauline held her straight away.

17/11/93 – In general Sean has been very good, and has made no fuss over the absence of Pauline. I got us organized and we got a bus into town, i.e. Merrion Street. Called to see Pauline, and Sean’s new baby sister … Played with Sean’s present from his baby sister, a truck with dumper, loader and scooper. It didn’t yet have a battery. Sean seemed to like his sister well enough, and after a while began to stroke her head.

22/11/93 – Susanna was no trouble, waking only for feeds and medicine. Everything seems more relaxed this time, more under control.

23/11/93 – Sean and I went to Bewley’s, and were engaged in conversation by a Christian Fellowship person from one of the Dakotas.

24/11/93 – Pauline and Sean went to the supermarket in the afternoon and Susanna slept/cried in her cot beside my desk while I worked. I now miss her when she’s not there – Pauline and I are delighted with her; she’s a lovely baby.

4 responses to “Some diary entries … September to November 1993”