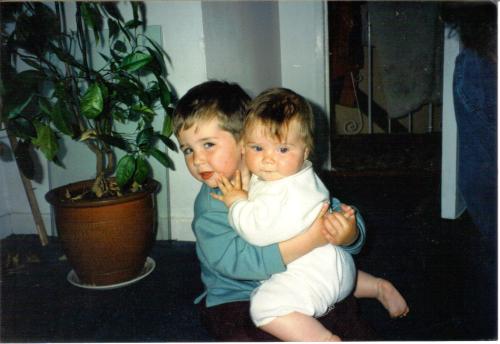 3/3/94 – Paul and Alan collected Sean, and they went to the party (in Eleanor’s mum’s house) … A woman called Karen left Sean home – he’d had a good time.

7/3/94 – We were expecting to go to Bernie’s for Sean, Susanna and I to get bioenergy treatment, but Bernie rang to say she had a bug.

8/3/94 – Nuala, Sean, Susanna and I went to Bernie’s, where she gave the bioenergy treatment to all four of us in turn. It was interesting and enjoyable, and relaxing. Sean and Susanna were very good.

11/3/94 – Nuala, Sean, Susanna and I went to Bernie’s for our final session. My eczema seemed to be clearing up a bit … We drove to the hospital to see Pauline … Pauline gave Susanna a feed … [later] While stirring together some cod liver oil and apple juice, Sean fell off a chair and most of the CLO spilt … He likes the concoction.

12/3/94 – Susanna made a name for herself by laughing uproariously for some time in the hospital.

13/3/94 – I got up with Sean after he had run in to Grandad, bounced on the airbed and ended up under the desk … [later] Pauline rang to say she was free to leave the hospital – Sean, Peter and I went to collect her.

3/4/94 – Spoke to Pauline, who had arrived back in Warrenpoint from Portstewart with S & S. Sean had had a great time in Dunloy with Jackie’s kids.

19/4/94 – Sean’s latest catchphrase: ‘I smell the blood of the poo.’ Repeated when amusement is shown.

21/4/94 – Pauline got up with Sean and Susanna; I got up at 8.45 and Sean helped me put out the rubbish. She took him to the playgroup; I collected him in the rain.

28/4/94 – Sean was at the playgroup – he was going to be going four days this week. He likes it a lot … We all went down to Dundrum … Susanna and I came home on foot/buggy; Sean and Pauline took the bus.

30/4/94 – We were planning to go out for a few drinks, and John’s niece Emily arrived with her friend Nuala to babysit. However, Sean did not cooperate by falling asleep, perhaps because we had forgotten to bring his bottle. John ended up driving Pauline, Sean and myself around Naas at 10 or so to try to get him to sleep. When he dropped off and I carried him to bed he woke up again, and refused to stay with Emily and Nuala, so Pauline ended up staying in.

1/5/94 – It was a lovely day – we sat out the back and read the papers. Sean made friends with some local children and played with them. He had a great time … [later] Sean took a shine to John, who read him books and played games with him.

5/5/94 – Sean was at his playgroup – he was all excited about visiting a farm with ‘his boys and girls’ on 27 May, but he’ll probably be in Warrenpoint then.

9/5/94 – They all went to the Health Centre for Sean and Susanna to have a check-up with the doctor. A nurse said that Susanna is in the top 5% by weight for her age, and is in danger of becoming fat. Pauline thinks she was talking through her arse. I think Pauline’s right.

21/5/94 – We all [Liam, Sian, Sean, Susanna and me] went to the zoo in the afternoon, and had a very good time. Sean and Sian were afraid to enter the undersea exhibition because of the darkness and sinister (whale) noises. They petted goats. Sean was anxious to see the penguins, but they were not there. He was also anxious to see kangaroos, but had to make do with wallabies and seemed disappointed that they weren’t fighting or doing anything much. He was scared of lions, tigers and jaguars, and very relieved that they were in cages. He had said well in advance that he didn’t want to see lions and tigers.

23/5/94 – A good one from Sean today. There was some pasta salad from Superquinn on his plate, and on trying a bit he said ‘This pasta hates me!’.