Some diary entries … September to November 1996 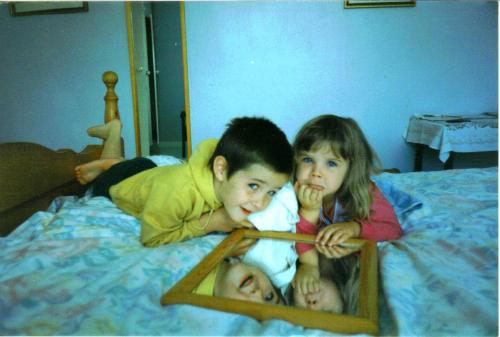 1/9/96 – In the afternoon we all went to Malahide Castle, going badly wrong on the way and ending up in Howth. We had a good time at the model railway display (which was very impressive) and playground, and there was a sort of rally of old and modern motor vehicles (we were all in a fire engine). Good fun. Got lost again on the way home.

2/9/96 – Sean’s first day in Senior Infants. Pauline gave him a shower in the morning and dressed him in his (mainly) new uniform … [Later] Pauline, Susanna and Olivia (who started school today) went to collect Sean and will head on to the beach … [Later] Pauline and the kids arrived back from Bray …. Sean’s first day back at school had gone fine.

6/9/96 – Sean slept late, having come in to us during the night after a ‘bad dream’ … [Later] Phillip was here playing with Sean for the afternoon, to Sean’s delight. They set off to go around the block, but crossed the road and ended up in Broadford Drive, to the annoyance of Pauline and me.

7/9/96 – Pauline and Susanna went with Sean to watch him have his first swimming lesson in Sandymount, which went well.

12/9/96 – I took Sean, Susanna and Olivia to the grassy space at the end of the road, where we played football and they ran races.

17/9/96 – Pauline took the kids out to get Sean’s birthday present from Dave, Dervla and Keelin. He chose a large ‘fighter aircraft’ that can do lots of different things – he’s very happy with it.

19/9/96 – I took the stabilizers off Sean’s bike and we all went to the green area at the end of the road: soon Sean was riding it by himself, though he couldn’t start himself and would fall off when he stopped. After dinner we all went to Marley Park and soon Sean was doing everything on his own – he cycled a long way on the grass. He was delighted with himself, and rang Granny and Grandad to tell them when he got home.

20/9/96 – Pauline took Sean and Susanna swimming in Cheeverstown, and they went to McDonald’s afterwards. Then we all went to Marley Park again, and the kids cycled their bikes.

23/9/96 – I posted Peter a collage that Sean had done of Peter with his yacht, pet crocodile, etc.

25/9/96 – Susanna was excited about going to ‘her school’ – Pauline starts her counselling course in DATE today and Susanna will be going in the crèche. I had to make a sandwich for her and put it in her lunchbox.

27/9/96 – Susanna slept right through, so everyone had a good sleep. She and Sean were downstairs again first thing, playing with the remote control lorry and racing car. Sean went off to school after more revision of words for his test (!) today … [Later] Sean had done well in his test and got his first reader, so he was very pleased.

29/9/96 – We tidied up the garden and I watched most of the Meath v. Mayo replay – Pauline and the kids watched the end of it and were fanatical Mayo fans. Meath won, unfortunately.

2/10/96 – Sean has PE today, so he had to wear his runners. (In the event he was barred from PE for pushing and shoving.) [Later] Sean, Susanna and Olivia put on an ‘Irish dancing’ show.

5/10/96 – We got the place, ourselves and the kids tidied up and a photographer arrived to take some photos of us … I took Sean and Susanna to the little park at the end of the road, where they did some cycling, and then around the block for a walk.

6/10/96 – After lunch Sean and I broke up the base of an old bed that was in the shed, so that it could be taken to the dump. Sean enjoyed this, and we attached two of the springs to his feet for a while at his suggestion.

7/10/96 – Sean arrived home from school with a potential black eye – he had run into someone in the yard.

10/10/96 – Sean and Susanna were up early. Sean was going to Marley Park with his school today, and didn’t have to wear his uniform … [Later]Sean had a good time in the park – they walked all the way there, and to the playground, and back, so Sean was very tired.

13/10/96 – Pauline and I took Sean and Susanna to a ‘Teddy Bear’s Concert’ in Amharclann Naithí – the Dublin Youth Orchestra played a concert geared towards kids and kids were encouraged to bring teddies with them. Also, there were two people in teddy suits dancing about. The music was very good.

16/10/96 – Pauline and Susanna did well at their class and crèche – Susanna now minds two small babies and doesn’t cry. In the afternoon Pauline took Sean and Susanna to Dundrum for storytime in the library, which turned out to be entirely in Irish. Susanna got involved anyhow. Later the three of them plus Olivia made some dough and some figures out of it, and baked them in the oven. Sean painted his.

21/10/96 – Pauline and Susanna went to the mother-and-child playgroup, which Susanna loves – she was very excited about it.

28/10/96 – We got the office prepared and gave the walls and ceiling a coat of white paint, helped by Sean.

5/11/96 – Pauline bought a bow and arrows for Sean, with which he was delighted, and some stuff for a Robin Hood costume – his class will be dressing up as TV/book characters on Friday. They dyed material for the costume.

8/11/96 – Sean was up early, and in bed with us for a while. He was dressed up in his Robin Hood outfit for school – Olivia went as Esmeralda from The Hunchback … [Later] Sean had a good time as Robin Hood – the kids had to walk on a catwalk.

9/11/96 – ‘It is low clouds today on the mountain’, Sean wrote, asking for guidance on spelling. Quite poetic, I thought.

16/11/96 – Susanna’s party commenced, attended by the four of us plus Siân, Pete, Olivia, AJ, Andy, Daniel, Rory and Michael (Noonan); also Liam, Christine, Dónal and Ruth. The kids played and had fun and eventually ate cake, sweets and so on; Susanna got a lot of cards and presents and had a great time.

17/11/96 – We watched a documentary on explosives with Sean, who is fascinated by anything spectacular – avalanches, earthquakes, explosives, etc.

18/11/96 – Sean and Susanna were in the bath on their own when there was a power cut and I lost work for the second time today – when the lights went out it was pitch dark. Sean shouted in excitement, and Susanna got into a terrible panic and started screaming. We calmed her down and lit some candles; Pauline lit a fire. It was great fun for the kids; not so good for Pauline and me.

25/11/96 – Sean and Susanna had been tidying the house – Sean had become obsessive about it … After dinner I played a game with the kids where one of us would hide a swimming tube and the others would try to find it. Susanna, not grasping the concept, would always show where she had hidden it.

29/11/96 – Pauline spent the afternoon rigging up the bunk beds for the kids, with some help from Sean and me. They were thrilled with them, especially Sean.

10 responses to “Some diary entries … September to November 1996”