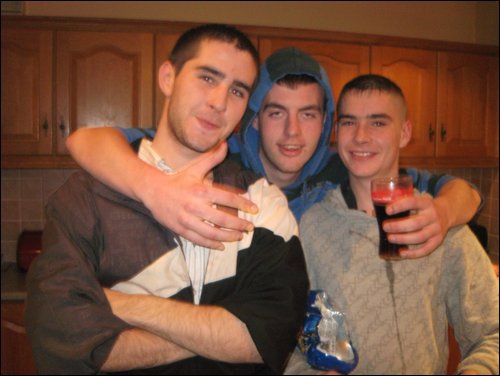 It’s been a great weekend for Irish rugby, starting with Connacht’s first Heineken Cup victory, 9–8 against English high-fliers Harlequins on Friday night. Yesterday Pauline and I watched the Leinster–Montpelier match in a pub in Virginia, and the Northampton–Munster match in our local.

Leinster comfortably beat Montpelier 25–3 to finish their group unbeaten, but we had no way of knowing what would follow – one of those stunning, gargantuan performances that Munster have produced regularly over the years, ever since they beat Toulouse 31–25, away, in the 2000 semi-final (clips from that match below).

To play Northampton (beaten finalists last year) away and score 51 points despite being crucified in the scrums was simply amazing, and the emergence of O’Mahony and Zebo this season augurs well for the future. This game summed up why Sean loved Munster so deeply.

Ulster lost narrowly away to Clermont Auvergne, but still go through, so for the first time there will be three Irish teams in the quarter-finals.

Munster had reached the quarter-finals 12 times previously, but had never before won all six group games. Now last year’s disappointment is consigned to history, and both they and Leinster have a chance to become the first club to go through a Heineken Cup game unbeaten.

Before that, of course, there is the Six Nations to look forward to.