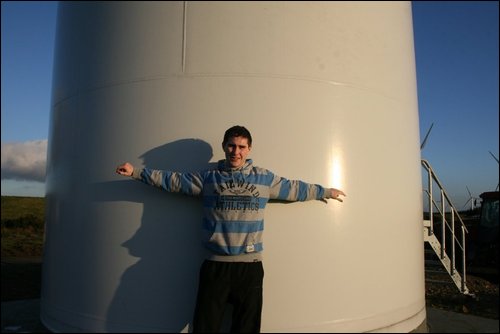 I remember the day the photograph was taken … Sean told me that he and some of his friends had been touring around aimlessly in a car – I think Conor was driving. They saw some wind turbines on a hill in the distance, and decided to drive to them. Accomplishing this was an adventure in itself, and they had a fun day.

At Garry’s funeral today we spoke to Conor and the other friends that would have been with Sean that day, as well as Clio. It was strange to see them in the setting of a funeral again. I hope that this will not be repeated any time soon, and that we’ll be seeing them in happier circumstances.

Last night in a vivid dream I was walking down a slope in some unknown city, with the sea straight ahead; the sun was shining brightly. I was thinking about Sean and Garry, and wondering about the meaning of life and whether I had learned anything in my 51 years.

I began to go into a different ‘head space’, as I sometimes do in dreams. I am aware of this as it happens … aware that it is ‘only’ a dream, but also that it is very real, and in no way ordinary. A feeling of ecstasy came over me.

I realized that, if I wanted to, I could probably fly. So, I began to run forward and, sure enough, I took off. I flew very high, effortlessly, with a wonderful feeling of bliss and contentment. At one point I began to fall like a stone but was still ecstatic, knowing I would have a soft landing, and thanked God for looking after me.

At Garry’s funeral this morning a psalm I didn’t know was sung – ‘On Eagle’s Wings’.

And He will raise you up on eagle’s wings,
bear you on the breath of dawn,
make you to shine like the sun,
and hold you in the palm of His hand.

I had told Pauline about my dream – the psalm reminded her of it, as well as me.

8 responses to “On eagle’s wings”