Some diary entries … September to November 1998 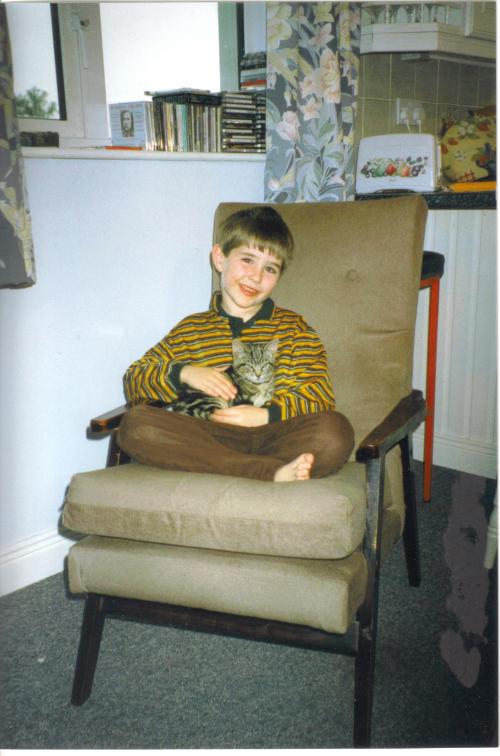 1/9/98 – While we were eating some pizza for dinner, two wagtails flew into our bedroom window: one soon died; I put the other in a hedge where it may have survived.

2/9/98 – We had to wake Sean and Susanna in the morning for their first day at their new school. Pauline dressed them in their grey uniforms and took photos … [Later] Sean and Susanna both enjoyed their first day – Pauline had worried about Susanna because she cried a bit this morning on arrival, perhaps a bit confused. Sean, typically, ‘completely loves’ his teacher … While the kids were playing at Sinead’s, Pauline and I had a long walk around by Lurganboy. It was a beautiful evening, and the country landscape was lovely. We saw a fox running in a field, playfully (it seemed) trying to catch birds.

5/9/98 – [In Warrenpoint] Pauline rang a number in the Newry Reporter offering kittens; it turned out to be in the next street. We went to see them, and Sean and Susanna chose one each from four or five.

6/9/98 – We went to collect the kittens, to be known as ‘Itsy’ and Tiger’. Susanna had intended to call hers ‘Shepherd’, but changed her mind … During the latter part of the journey home S & S spent their time trying to keep the kittens in the box and complaining of the smell of poo. The kittens were a little timid, especially Tiger, but will soon come round. My nose was running and I was sneezing on account of them – I hope this won’t last. At least we have them doing their business in a tray of soil. Sean and Susanna are enchanted with them.

7/9/98 – The children had a great time playing with the kittens before going to school.

8/9/98 – Sean said that last night, when he entered the living room in the middle of the night to look for us, ‘something jumped down’ on him.

9/9/98 – Pauline had a brief meeting with Sean’s teacher after school – she thinks he’s a wonderful little boy, and gave him generous praise – articulate, polite, and so on.

10/9/98 – Every time we go out the front door now we are confronted by five fat young house martins (or swallows?) that can hardly fit in their nest.

11/9/98 – All of us (including Sinead, who had dinner with us) went for a walk in our wellingtons up the fields and back by the road, which was very enjoyable.

14/9/98 – The kittens played outside and in the garage – they’re now fully accustomed to their new home, and seem very happy. I took Sean for a walk up the fields.

15/9/98 – While they were all here Sean found a large frog in the grass, which provided some entertainment for everyone.

17/9/98 – James and another guy are here, putting up a barbed-wire fence … We are now encircled by fences, unfortunately – barbed wire on three sides and chicken wire on one. There’s no easy way to get into the field, so I dug a kind of trench beneath the fence near the muck hill for the kids to use, with some minimal help from them.

18/9/98 – Sean was delighted with the trench on seeing it this morning – he hadn’t seen me finish it. Susanna described it as ‘humongous’ … [Later] I went for a walk up the fields, and walked the perimeter of some fields. Ended up walking along ‘our’ stream with Sean – very nearly stepped on a frog.

20/9/98 – Maire and the kids came over, and we all went to the lake, where we did some fishing – AJ and Andy had rods, baits, etc. Sean and I did some proper spinning, but didn’t catch anything.

22/9/98 – We all went out picking blackberries, and got quite a few. Sean is very eager to get moved up to second class, as he says the work in first class is too easy. Pauline and I will discuss it with his teacher … [Later] Sean was awake late – he was crying because he missed his old school. We consoled him as best we could.

23/9/98 – Pauline, Sean and I had a meeting with Ms White, Sean’s teacher. The upshot is that he is to have a kind of trial period of doing second class work … He did lots of reading later … Pauline spoke to June and Maria – Billy is missing Sean terribly.

24/9/98 – The kittens are getting to be on much more intimate terms with all of us, which is nice for the kids – Susanna treats them like small children.

30/9/98 – Sean is doing well in second class, and his teacher seems content to have him there.

5/10/98 – The kittens have taken to crawling under the car and up beside the engine – very dangerous.

8/10/98 – Pauline had been to Kells, and borrowed a ‘magic eye’ book from the kids’ library, so we all spent much time looking at (except Susanna). Pauline and I were able to get the 3D effect and images; Sean wasn’t, to his frustration.

10/10/98 – Maire arrived and dropped Sean off –we were all pleased to see him. He’d had a great time with the Noonans.

17/10/98 – On the train [from the Cork Film Festival] I introduced myself to Country Joe McDonald and sat beside him, and we had a good conversation all the way to Templemore – he was being picked up there, and would do a gig at Roscrea Rugby Club that night. Country Joe is an interesting guy … He’s writing a screenplay on Florence Nightingale and the Crimean War.

21/10/98 – Pauline did a good deal of work on her lampshade, and also helped the kids to do some grinding and so on – Sean is making a stained-glass ‘Titanic’.

24/10/98 – In mid-morning we all went to Kells, and did a big shop. It was lashing rain. Then the car wouldn’t start, and eventually we had to get a taxi home. We then discovered that the front-door key was in the car, and the back door was locked from inside. Sean came to the rescue – we got him in the ensuite window, which is small, and he opened the back door … [Later] Peter and Nuala arrived with Bertie, who had an uneasy relationship with the cats over the weekend. We all had a lovely dinner in due course, and drank a few bottles of wine. The lights were dim for part of the evening, and we had a brief power cut. Sean and Susanna performed ‘The Boogie-Woogie Washerwoman’.

25/10/98 – After the uneasy peace between Bertie and the cats, he came face to face with Tiger at the back door and chased him, followed by Itsy. The cats slept in the garage.

29/10/98 – Maria arrived with her mother and the kids; they didn’t stay, but dropped off Billy and Matthew [Dublin friends of Sean].

30/10/98 – We let Sean and Susanna stay off school. The children wrote stories and Pauline took them all for a walk.

31/10/98 – Pauline got the kids dressed up – Sean as a dying soldier and Susanna as a witch – and took them, with Sinead, to Maire’s for a Hallowe’en party.

6/11/98 – Pauline and Maire collected the kids from school at 2, and Maire took hers and ours to Dublin – they were to go bowling tonight with June, Donagh and their kids, and also Matthew and Kevin. They would be staying at June and Donagh’s.

11/11/98 – We got the kids out to school. Both of them still like it a lot. Susanna now gets homework, and likes it so much that when she’s finished she rubs it out and does it all over again. Sean is still inclined to do his letters the wrong way round – otherwise he’s doing very well also.

13/11/98 – Pauline drove us both to Ballyjamesduff to look at Joey Burns’ bog oak carvings in the County Museum. They were very impressive. I backed into a tall, unstable one on a plinth, and had to be very quick to catch it before it hit the ground. Pauline thinks I should do Joey Burns’ three-day course in bog oak carving, and I’m inclined to agree.

15/11/98 – The soldering has continued – Sean soldered his ‘Titanic’, his first piece of stained-glass work.

16/11/98 – Susanna unwrapped her presents – she got an ironing board and iron from Sean, and a farm set from various other relations. Of course she already had her playhouse. She was very pleased.

29/11/98 – I had a walk up the fields in the afternoon and, prevailed upon by Sean, made a bench for Susanna’s house. They helped me at the start, but then Sinead arrived.

10 responses to “Some diary entries … September to November 1998”