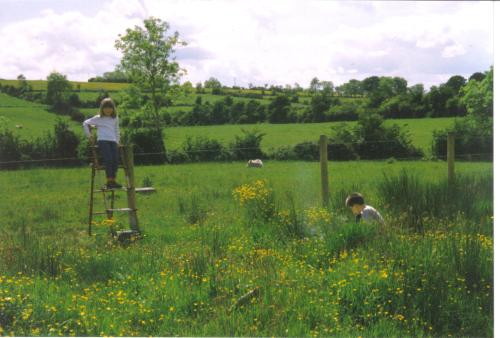 1/12/98 – I had a walk up the fields in the afternoon; they seemed magical in the fog, which was very thick.

3/12/98 – Before we went to bed I was locking up the garage when I heard a loud and strange noise from the field. I went to call Pauline, who had heard a strange (dissimilar) screaming the other night, then the noise had moved and got more distant. Perhaps the cry of a wild goose or some other bird, but very eerie.

4/12/98 – When the kids got home we all went to Maire’s to feed the hen and chicks … We let the kids stay up for the Late Late Toy Show, having tried unsuccessfully to video it. So they were up till midnight.

8/12/98 – The kids had no school on account of the holy day. They played around the house, and Sinead was here in the afternoon. She also took them to her house to help put up the Christmas tree … When I called Itsy at midnight, there was no sign of her – just a faint, distant mewing. Pauline, Tiger and I went out with a torch to look for her, and found that she was stuck up a small tree. There was nothing we could do at that moment, so we went home. Then Itsy came bounding in, to our relief.

11/12/98 – Pauline and I went to the school and had meetings with Sean and Susanna’s teachers – the verdict is that Susanna’s doing very well, and Sean’s doing very well except for his writing – left to right and right to left have always been more or less equivalent to him, and he seems to have a form of dyslexia.

14/12/98 – Pauline took the kids to Virginia, where they chose a Christmas tree from the field where it was growing. Sinead helped us to put it up and decorate it.

16/12/98 – The kids wrote a lot of Christmas cards for their friends – Sean took particular care over one he made for a girl called Elaine, whom he likes because ‘she cares about everybody’.

17/12/98 – We got the kids out to school – Sean agonized over whether the writing on the card for Elaine was too messy, whether he should give her a bought card, and so on.

20/12/98 – The kids and I broke the ice on the swamp; Itsy and Tiger walked on it. The kids made little tarts out of pastry and watched The Sound of Music with Pauline.

22/12/98 – We both went to the play in the school, and gave Maureen a lift there … We gave Maureen and Sinead a lift back, and they showed us the large dead turkey hanging in the shed, somewhat to Susanna’s disgust. Sean got a book in the post and a nice letter from Matthew [Dublin friend]. Pauline and the kids baked biscuits … Pauline soldered an angel for Susanna’s teacher; Sean had given one to his teacher today.

23/12/98 – We got the kids out to school – no need to give them lunch today, as they were having a party. They brought in home-made biscuits, which were hardly necessary as the parents’ association had bought loads of stuff … [later] The party had consisted of them stuffing sweets into themselves for an hour. Sean had won a bottle of red lemonade in a raffle drawn by Pauline, to his delight.

24/12/98 – The kids were in bed and asleep quite early; Pauline and I ate smoked salmon, brown bread and salad and watched some TV, then wrapped those of the kids’ presents that we hadn’t wrapped before, and did Santa and Rudolph’s work for them.

25/12/98 – The kids didn’t wake us till 8.30 or so, then there was a lot of present-opening. Sean and Susanna were both thrilled with what they got. From Santa, Sean got a ‘Capsela’ set of components for making motorized vehicles, robots, etc. He also got an Action Man watch, an encyclopedia of science, and Esio Trot, which he’d already got from Matthew – we hope to change it. From other people he got a Yamaha keyboard (us), two pairs of pyjamas, a reading light, an art set and so on. From Santa, Susanna got a Barbie doll and various clothes for her, a jewellery-making set and a book – Sophie Hits Six. She also got a junior computer (us), a reading light, a pair of slippers and a pair of pyjamas, a set of blowpens and so on … [Later] Before our dinner we’d gone for a walk on the road, singing ‘Walking in a Winter Wonderland’, which we all know. And it was a wonderful Christmas Day … James and his sister Kate called, and we had a chat … the kids were at their most charming, and kept Kate in particular entertained.

26/12/98 – I have more or less taught Sean how to play ‘Silent Night’ on the keyboard – he’s very keen … In the afternoon the wind rose to what must be gale force, and has been going on like that for hours – I’ve never known such a strong wind, I think. The trampoline was lifted up, carried over a fence about five feet high, and blown into the next field. And the trampoline is quite heavy.

27/12/98 – After breakfast we all went to Virginia … then had a good walk in Deerpark. Many large trees had been uprooted by the wind … [Later] Pauline and I retrieved the trampoline from the field.

28/12/98 – The swamp is frozen, and there is a thin layer of snow in the fields. We took the kids up the fields, and all of us had goes on the sleigh, which was good fun though the snow wasn’t really deep enough.

1/1/99 – It was an uncannily bright moonlit night – we took the kids out to see. The moon was casting well-defined shadows, and there was a tinge of green on the fields.

7/1/99 – The kids were back at school – Sean wasn’t looking forward to the prospect much. He’d rather be at St Attracta’s.

8/1/99 – Pauline arrived with Billy, to Sean’s delight – we hadn’t told him. Sean and Billy walked up the fields; I went up after them.

10/1/99 – The other day Billy asked Sean if he still loved Elaine, in earshot of Pauline. Sean hushed Billy up, and Pauline pretended not to hear … [Later] We all, including Tiger, walked on and through the ice on the swamp, which was ¾ of an inch thick.

12/1/99 – Sean has got a book of prayers to prepare him for his first holy communion, and he’s taking it very seriously – he claimed to have read 38 pages of it in bed.

16/1/99 – I went through Sean’s religion book with him earlier, and explained about holy communion and so on.

25/1/99 – There was an interesting programme on ‘the Roswell incident’, which the kids watched too – Sean enjoyed it thoroughly.

30/1/99 – Sean wanted to make a dumbbell from my old light stand, so he and I cut out some circles of plywood to put on it. We had a good time doing this.

9/2/99 – Pauline and I had a go on the exercise bike – Sean cycled four miles on it later, which made him quite proud.

11/2/99 – I read some of Keats’s poems later – read one to Sean, which inspired him to write a poem of his own, which he asked me to ‘edit’. I did it and an older poem he’d written on the computer.

14/2/99 – Susanna and I had a walk up the fields; I ‘edited’ some chapters of a story Sean is writing; Sean did some keyboard practice.

15/2/99 – Sean is still writing chapters of his story, very enthusiastically, and was awake late. He doesn’t seem to need as much sleep as he used to.

16/2/99 – The kids made birthday cards for Pauline and Sean wrote a poem for her.

17/2/99 – Pauline and the kids were at the site again, and watched concrete being poured into the foundations. They put some money in for good luck.

18/2/99 – Sean and I had a few games of pool. He beat me in one, to his great delight. He got 17/18 in his spelling test, having got full marks for the past two weeks, so he’s doing well … [Later] Maureen was over again later, then came back to the house with a frog she’d found on the road, to show it to the kids. It was a fine specimen, large and perhaps ready to spawn, orangeish underneath. She had feared it would be run over.

25/2/99 – Sean had a sore throat in the morning, and stayed off school. He was well able to get out of bed and play, though.

26/2/99 – Sean again was apparently too sick to go to school, although he soon perked up. Susanna’s teacher was missing, so Pauline brought her home and she was here for the day also … [Later] Pauline and I drank a bottle of wine and watched TV – there was a very moving item on the Late Late Show in which Christy O’Connor junior and Charlie McGettigan talked about the death of their sons.

28/2/99 – Susanna fell in the mud at Maire’s and had to be rescued by Donal; she came home showered and wearing Andy’s pyjamas.