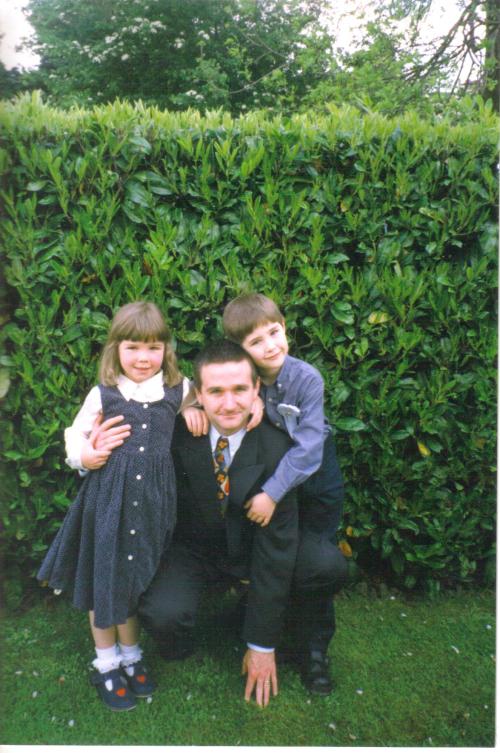 1/3/99 – Sean played Hercules – he loves it and is progressing through the various levels.

4/3/99 – Pauline took the kids to an Irish dancing lesson in Maghera (their first) – they both enjoyed it enormously … A tree fell across the road today just after Maire, Andy and Susanna passed on the way home from school, and just before Pauline drove to Erika’s – she had to turn and go another way.

5/3/99 – We watched The Simpsons and the final of Robot Wars; Sean rang Peter to tell him about the latter and we chatted to him.

6/3/99 – Pauline went out to look for Itsy, who hadn’t come home last night (not for the first time). She found poor little Itsy dead by the side of the road – she was still warm, her eyes were open and she wasn’t marked except for some blood by her nose. The children were very upset … She was a lovable cat.

7/3/99 – My dad rang to tell me how much he’s enjoying a copy of Oscar Wilde’s Complete Works that I brought home from London for him in 1979.

9/3/99 – Three herons flew just over the car beside the site, which Pauline interpreted as a good sign.

12/3/99 – Sean played with the lambs a lot … The lambs got various feeds of formula milk from a bottle.

13/3/99 – We all watched the fireworks display from Dublin on TV – Sean was most impressed.

14/3/99 – Sean and Susanna presented Pauline with mother’s day cards … We allowed them to make coffee and bring it to us in bed, for the first time ever … Sean, Susanna and I burned some rubbish and messed about outside.

17/3/99 – We all, including Sinead, went to the St Patrick’s Day parade in Mullagh, which was about what one would expect in a very small town, i.e. pretty hopeless. But the kids enjoyed it … We watched the Man Utd–Inter Milan match … Even though Sean likes Man Utd best, he was up for Inter because Ronaldo was playing.

20/3/99 – Sean gave us coffee in bed again, a bit lukewarm this time … Sean and Susanna are now making mosaics …

22/3/99 – Helped Sean with his homework – he continued with his flatfish mosaic, which is looking very well … Granny and Grandad had rung to tell the kids that Bertie [dog] was dead – they weren’t all that upset about it, as they hadn’t know Bertie well. This led to a discussion of death between the four of us, with Sean wondering which of us would be the first to die. Susanna said ‘It’s a pity that there’s such a thing as dying’ – a thought that we’ve all had at some time, probably.

23/3/99 – There was a jackdaw in the office, which must have come down the chimney – there was soot and poo on the pool table. I managed to get it out the window.

24/3/99 – Sean had come in a couple of times during the night – the second time he said he had had a nightmare that ‘scared the living daylights out of’ him – Tiger had turned into a chimpanzee … I walked part of the way up the fields three times in all, with Sean and Tiger and, the last time, Susanna. A feature of these days is that Tiger plays chasing games with one of the young calves in the field. The cow is quite protective but Sean and Susanna have been stalking the calves, and Sean has managed to pet one of them.

25/3/99 – The kids and Tiger spent some time in the field with the calves before school.

3/4/99 – We got up around 9.30 and got Sean ready for his first Gaelic football match, which was a challenge between Munterconnaught and Cuchullainn’s, from near Mullagh … Sean was a sub but didn’t get a game, which didn’t bother him, and Munterconnaught under-12s were well beaten in the end.

8/4/99 – Fr Brady called while Pauline was out at the shops, and heard Sean’s first confession (or whatever they’re calling it now) in his car … Pauline, Sean and Susanna and, latterly, Sinead ran around outside, playing ‘ice and snow’.

11/4/99 – Sean gave us coffee in bed … I made pancakes for Sean and Susanna from the rest of the corn dog batter … Sean was elated at having finally got to the next level of Hercules, after a lot of trying.

12/4/99 – Pauline went to Kells to supervise the kids’ swimming lessons – they went on the bus, and enjoyed the swimming. Sean had feared that he would have forgotten how, but he had no problem. Pauline did cauliflower cheese for dinner, and we actually got Sean to eat a fair bit – we’re determined to broaden his diet.

15/4/99 – Sean came home from school with his two top middle front missing – they’d been knocked out by a football, but were ready to fall out in any case. He looks very different without them … Sean and I messed about with a Rubik cube that one of his friends had loaned him. One of his bottom front teeth fell out – he left all three under the pillow, but managed to lose them.

19/4/99 – I had a walk up the fields and then took the kids and Tiger into the first field across the stream – they were fascinated by the 16 inquisitive bullocks, which had followed me closely earlier.

26/4/99 – The four of us played Chinese chequers, and I showed Sean how to play chess, on a crummy little plastic set.

27/4/99 – The kids had a great time running around with Sinead and sometimes Pauline … I played chess with Sean again.

1/5/99 – We stopped in Newry to do the shopping … bought a shirt, trousers and shoes for Sean for his first holy communion.

2/5/99 – We dressed Sean and Susanna up, Sean in his communion clothes, and took them to see Peter [in hospital]. He was delighted to see them. Susanna was a bit shy, but Sean rose to the occasion with jokes.

5/5/99 – Pauline had her hair cut in Virginia – it’s shorter than it has been for a long time, and Sean and Susanna weren’t too impressed.

8/5/99 – We got ready and went to the church by St Attracta’s, and Sean duly made his first holy communion with a lot of other kids. The ceremony was quite moving – the priest was very good, far better than the norm, and everything was done with St Attracta’s usual flair. [later] A very successful day. Sean is still very popular among his old friends in Dublin and their parents, and has several invitations to stay.

10/5/99 – Sean and Susanna got up some time after I’d put them to bed, Sean saying he had too much energy to sleep, and I let them watch the end of a programme on earthquakes.

19/5/99 – Someone called ‘The Joker’ did a magic show at Sean and Susanna’s school, which they enjoyed greatly …. we all had a walk up the fields – it was a beautiful evening.

21/5/99 – Sean got full marks on his spelling test, not for the first time. He’s well up with the class standard on everything except Irish, which needs more work.

26/5/99 – Watched the Champions League final between Bayern Munich and Man Utd later, which Utd stole with two injury-time goals, to Sean’s unbridled joy. The last time they won it I was his age, almost exactly.

27/5/99 – While I was writing yesterday’s account in my diary, I noticed a tractor driving along rather fast on the road. I saw it go up in the air and turn over, and rushed out to help the driver, a young chap called Ryan from Leeds who is living with his aunt and uncle.

28/5/99 – Susanna came in to us in the middle of the night (she couldn’t sleep because of her ‘thinkings’) and Pauline ended up sleeping with her; then Tiger kept us awake with his mewing for the second night in a row.

30/5/99 – Susanna had been playing an ‘editing’ game: taking a couple of sheets of my scrap work and laboriously crossing out words or parts of words, making insertions, circled instructions and so on. She’s done this before, though we’ve never spoken about it – she takes everything in.