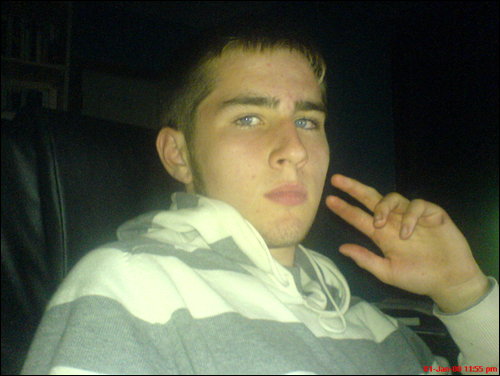 We found an old compilation CD Sean made … this is on it. It is one of the songs I recall very well from a kind of ‘golden era’ of listening to music with Sean in this room (which Pauline painted this weekend … it’s now white and bright instead of blue), when I heard a lot of artists I’d never listened to before, such as Against Me!, Kings of Leon and Damien Rice. The photo shows him here, on the chair where I’m now sitting, and was taken around the time in question.

I don’t know where Sean first heard this song. I see from Wikipedia that it reached no. 3 in the Irish charts – higher than anywhere else except Cherry’s native Sweden – but that was back in 1997. I think it’s really good, and it reminds me so much of Sean (but then we think of Sean all the time anyway). If I’m not mistaken, he used to play one other song by Cherry, but I can’t remember what it was. He would often play a track and get me to try to guess the artist.

Fifty-one weeks today. We were sad to see Ireland exit the Rugby World Cup yesterday, as success around the time of Sean’s anniversary would have seemed fitting – especially as Sean O’Brien made such a big impact on the tournament.

But it wasn’t to be … never mind. We had a nice weekend anyway. Nothing but love.