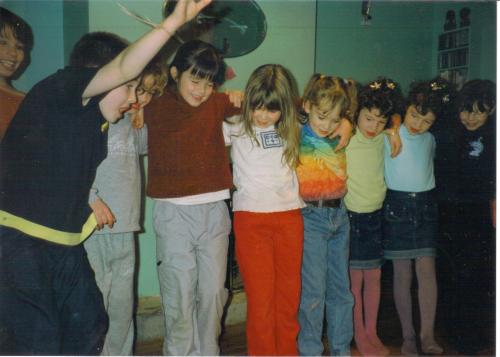 1/12/00 – We got the kids out to school. Pauline went to Virginia, where the kids are doing a show that Anne and Pauline have prepared them for … the show went well, but she and Anne are going to insist on having more time to prepare the kids in future … Maire rang from Dunshaughlin on her way home from the USA – Sean and I went to her house, turned on the heating and lit the fire.

2/12/00 – AJ and Andy arrived, and spent much of the day here – Sean was overjoyed to see them … Sean beat me in a game of chess, which pleased him greatly.

7/12/00 – We had parent–teacher meetings … Sean and Susanna are both doing well – the only negative note is that Sean is often ‘in a world of his own’ and has to be repeatedly reminded to concentrate on his work … Pauline took the kids to Dublin – she had to buy stuff in the glass shop, and was taking them to see The Grinch … I played chess with Sean.

8/12/00 – Pauline and the kids went to Virginia and bought a Christmas tree; we put it up and they decorated it … Sean and I played chess, and we all watched The Late Late Toy Show, which was quite entertaining.

9/12/00 – Sean and I had a walk up the fields across the road: we were gone for an hour and a half or so. We both enjoyed it greatly, though I got a jolt from an electric fence at one point.

25/12/00 – Sean woke Pauline and me in the middle of the night and early in the morning, wanting to open his presents. We all got up around 9, and the present opening commenced – Sean’s main ones were a jumping car and a gold Pokemon game from Santa; Susanna got a ‘Baby First Steps’ and a Teksta robot dog from Santa; they got various things from us.

1/1/01 – Pauline, the kids and myself went to the Lough Crew Hills and walked up Sliabh na Caillighe and around the cairn and tombs – it was windswept.

30/1/01 – I played chess with Sean, who apparently will be competing at chess in the Community Games.

1/2/01 – We allowed Sean to watch the James Bond movie The Living Daylights.