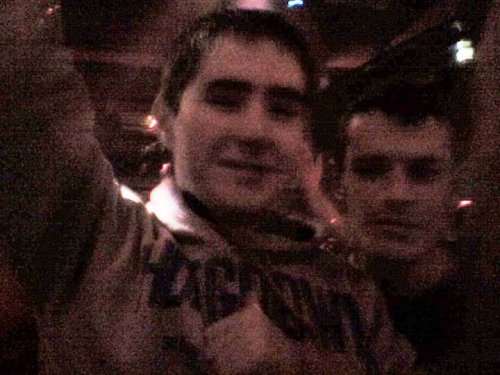 Sean with his friend 'Cusker'

We continue to hear stories about Sean. Yesterday we learned that after the brother of one of Sean’s close friends ‘came out’, Sean approached him to shake his hand and congratulate him, and say ‘well done’. Sean, I think, was the only one to do that, and it meant a lot to the young man in question. He also made supportive comments online. Sean believed that people should be what they are, and be allowed to be what they are.

As Susanna puts it, Sean was ‘very accepting’. She is very accepting too … exceptionally so. She is a lovely person, and Sean was too. We hear that he often made the effort to talk at length to someone who didn’t quite fit in, or was on the edge of the group, and we have heard the same thing about Susanna – from her teachers and others. They tell us that she is a wonderful ambassador for her school.

Pauline and I are proud of our two children. They are/were a credit to themselves, and also to us. We brought them up to be good people, to be accepting of difference and to respect others. We gave them good example. We respected them and they have respected us.

Sean often spoke highly of us to his friends, and they knew how much he loved us. When he first brought Clio home, soon after they met, she was a bit nervous about meeting us. Sean said not to worry … that his parents weren’t like most parents.

A bit over a year ago we learned that Sean would not pass his second year at college, after doing brilliantly in his first, because his attendance record had been poor. He was living in an apartment in Cavan at the time, and Pauline and I went up to meet him and discuss the situation with him.

We went to a pub near his apartment. None of us drank alcohol. Sean apologized for, as he saw it, letting us down. He told us how much he respected us. He cried some tears. There were tears in my eyes too … tears of love and empathy for Sean.

The three of us agreed that it was far from being the end of the world. Sean was still just 18 years old, and had plenty of options (as it turned out, his first-year results led to an offer of a place on a very good course at Dublin City University, which he was planning to take up this year). He told us that he had found out a lot about himself during the year, and I knew that this was true. He had done what he had to do – followed the only path he could. There was an intensity about him. At 18, he was a grown man in love with the world, who radiated love and received it, in abundance, in return.

As we drove away that April night, we watched Sean as he walked back to his apartment and his new life, semi-detached from us. He had not let us, or himself, down. We were enormously proud of him, as always. I hope he was proud and happy too. He deserved to be.

He was what he was … and, as parents, we allowed him to be what he was. I am proud of us too. We have done our best, and we have done well.