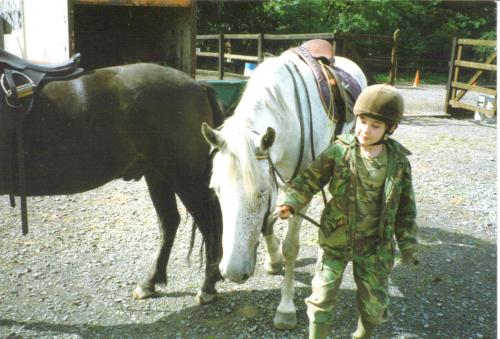 7/6/01 – The kids got themselves up at 7.45, had breakfast and walked to the farm. They have no school because of the referendums … [later] the kids went to the farm yet again … They had been entertaining everyone there by singing Beatles and other songs in the kitchen – Sean even sang ‘Hurricane’, and also did his ‘Yom’ act.

9/6/01 – Martin is here playing with Sean … The kids went to the farm … Sean brought words of Beatles, Dylan and Christy Moore songs, and they entertained their hosts once more.

17/6/01 – It was father’s day, and Sean and Susanna made cards for it … The kids mainly played outside, especially Sean – there were a lot of kids around; all the usuals plus Gary Rock and Romy’s cousin, Adam … Sean and I were manoeuvring Eamonn’s long ladder when he got a finger crushed – he’ll lose the nail.

18/6/01 – The kids had their last school swimming session at Kells … The movie [Perfect Storm] was standard action/disaster stuff; Sean loved it.

11/7/01 – I learned ‘Love Hurts’ on the guitar – Sean and Susanna took a liking to it, and we all ended up singing it last thing at night.

23/7/01 – Sean rang to ask whether Martin and Robert could have a sleepover here – we said yes.

24/7/01 – Robert, Sean and Martin apparently hadn’t got much sleep. They played outside – Sean had a great time.