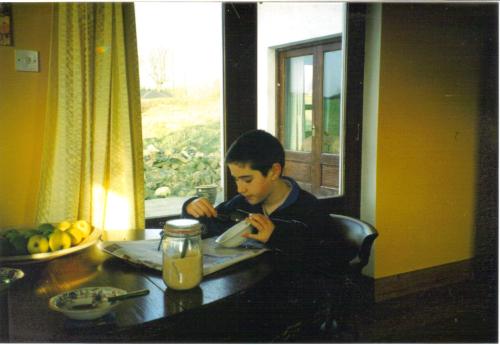 Some years ago, Sean and I used to play chess regularly. It was a winter pursuit, conducted in a room with a nice warm fire while Pauline and Susi, more than likely, played some other game.

While we played, we listened to music. For some reason, it became a tradition that we would always listen to Simon & Garfunkel’s Bridge over Troubled Water CD. Sean got to know and like the catchy, melodic songs on it (which is why I mention the ultra-catchy ‘Cecelia’ in a song I wrote recently). I think ‘The Boxer’ was his favourite track – a true classic.

Anytime for the rest of my life that I hear, say, ‘Baby Driver’ or ‘Frank Lloyd Wright’ I’ll remember sitting across the chessboard from Sean, watching him ponder his next while he hums along to an S&G tune and thinking how big he’s got and how beautiful he is (as well as hoping he won’t notice that I’ve exposed my queen).

And being proud of him when he beat me, notwithstanding my competitive streak.