Some diary extracts … February to April 2002 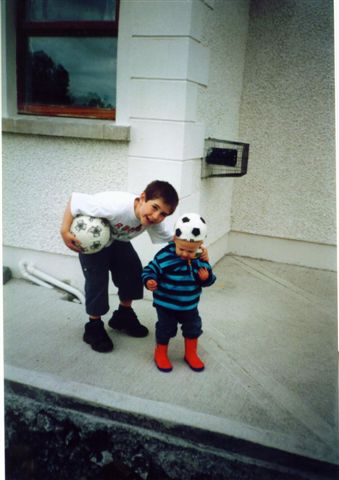 17/2/02 – Pauline dropped Sean and me off at the nine-eyed bridge to do some fishing – we didn’t catch anything. We dropped Sean off at Martin’s on the way home.

2/3/02 – Sean and I watched the Ireland–Scotland match, which Ireland won 43–22 without really being convincing – they seem to need some new forwards. Sean was delighted, of course. He and I did some kicking, passing and tacking in the field.

5/3/02 – I did some guitar practice with Sean, and Orla gave him and Pauline their lessons.

12/3/02 [Pauline and her friend put on a performance of Balor of the Evil Eye in Cavan County Museum, with a cast of 60 children …] Sean had an important part, as Lugh.

31/3/02 – Sean has been doing a lot of cycling with Robert and Martin, as well as wandering in the fields – an idyllic existence for a boy … We decided to go for a walk in Deerpark … We brought my bike and Susanna’s. Sean went off ahead, and almost immediately disappeared – there are numerous different routes through the forest. So the next couple of hours were spent with the other three of us looking for Sean – I separated from Susanna and Pauline for the last part. Of course he was back at the car. None of us had been particularly worried, but it was mildly disconcerting. Sean hadn’t been worried at all.

6/4/02 – Sean and I watched the eagerly awaited (by Sean) France–Ireland rugby match – a big win for France, unfortunately.

21/4/02 – Pauline and Sean practised the guitar. We watched Ray Mears’ Extreme Survival, which is a good programme – Sean especially likes it.

6 responses to “Some diary extracts … February to April 2002”