The following are extracts from my diary.

6/4/04 – I played some football on the lawn with Sean. He had an under-14 Gaelic match against Killinkere, which went well – Munterconnaught won by two points. Sean started in goals but moved to the defence, which he now feels is his best position, and enjoyed himself enormously.

13/5/04 – Munterconnaught played Knockbride in an under-14 match. Noel asked me to be an umpire and I complied, so I spent much of the match chatting to the Knockbride umpire and one or other of the goalkeepers. Sean played very well in defence, but Knockbride won fairly comfortably.

18/5/04 – Sean had a Gaelic football match, away to Killygarry. He had left his football boots in Donnybrook, so he had to ring around and borrow a pair … [later] Sean’s match had gone very badly – they had lost, and the referee had not allowed them to tackle – apparently Sean had got a yellow card and Shane a red, for very little.

20/5/04 – Sean had a Gaelic football match in Mullagh, against Cuchullains … Munterconnaught won the match by eleven goals or so, and have apparently qualified for the quarter-finals. Sean was delighted. He said he was marking Cuchullains’ best player, who was sent off for punching him.

27/5/04 – Sean had a match against Ballymachugh – a play-off to get in the quarter-finals of the league. Munterconnaught won by a point; Sean was delighted.

10/6/04 – Sean had a Gaelic football quarter-final away to Butler’s Bridge; Munterconnaught won by a big score.

17/6/04 – Sean had an important Gaelic football match in Virginia, a semi-final (under-14) against Drumalee. Drumalee were a much better team and Munterconnaught were beaten heavily, to Sean’s bitter disappointment. He played in several positions, and ended up in goals.

20/7/04 – Sean had a Gaelic football match at the local ground – an under-13 quarter-final against Mountnugent. Sean was captain, to his surprise, and he played very well in defence as Munterconnaught had a facile victory. We chatted to various people on the sidelines. Sean was elated.

29/7/04 – Sean has a Gaelic semi-final in Ballyjamesduff; Jacinta gave him a lift. [This was the last thing I wrote in my daily diary – afterwards there were some sporadic journal entries.]

3/9/04 – Sean played in the Co. Cavan ‘Roinn D’ under-13 final last night, for Munterconnaught against Knockbride in Breffni Park. Pauline and I went along. It was a very exciting match, which finished in a draw after many swings hither and thither. Sean did very well, but made the odd mistake (as did all his team-mates) and came out crying afterwards as he felt he’d done badly. By the time everybody got to Lisgrey House he had cheered up. Replay on Monday night.

8/9/04 – Munterconnaught lost the replay on Monday night, to the disappointment of all. They were two points behind coming to the end, then Sean Nolan scored a great solo goal and it seemed they would win. But the referee allowed a lot of additional time, and Knockbride scored a point to equalize. The match went into extra time, ten minutes each way. Knockbride ran riot during this time.

Sean played very well. We went to Lisgrey House, and he got a lot of praise. People admire him for the way he plays football but also for the way he carries himself. He really is a great kid.

18/10/04 – Munterconnaught lost to Knockbride in the under-14 Roinn D Cavan final at Lavey on Saturday. The margin was five points, but Knockbride were far superior. Sean felt that the Munterconnaught players were tired after a hard season. He was moved from defence to centre-field for the final, which didn’t work, as the game largely passed him by.

26/4/05 – Sean’s Gaelic football has started again – he is playing in midfield for Munterconnaught under-14s. He is now very big, strong and athletic, and has improved his Gaelic football skills, so he’s becoming a very good player. We went to see him play against Cuchullains; he scored a goal and his team won by two points.

28/5/05 – Sean’s team has a 100% league record, and will be in the semi-finals. We’ve watched the victories over Kill (away) and Killygarry and Cornafean (home). Sean has been playing very well in centre-field, and is one of the powerhouses of the team, which apparently is Munterconnaught’s best ever under-age team.

14/6/05 – Sean couldn’t run properly in the Butler’s Bridge match [sprained ankle], and spent the second half in goals, where he did well. Munterconnaught played very poorly, not helped by an apparently partisan referee, and lost. Sean played in goals for the entire match against Knockbride on Saturday, which was very exciting and ended in a draw.

22/6/05 – On Monday night, Munterconnaught lost to Kildallon in Lavey in the league semifinals, much to our disappointment. Sean did very well in midfield and scored a great goal, but his team lost by a point despite a lot of frantic late attacking. They were rather unfortunate considering that the Kildallon ‘goal’ never crossed the line, but Kildallon had a better balanced team.

12/9/05 – Sean had an under-14 challenge match yesterday, against Denn – a team a division higher than Munterconnaught. Munterconnaught ran out easy winners in the end, 6–10 to 2–6. Sean played in midfield and was captain, and scored a goal.

2/9/05 – Sean had a championship match last night, away to Ballinagh – Munterconnaught were beaten, and hence are out of the championship. I missed the match because of rugby training. Apparently Munterconnaught played very poorly, although Sean (captain again) did OK. He hurt his finger and switched to full-back in the second half, but that didn’t stop him from joining in the rugby session, Pauline having dropped him off on the way home.

23/10/05 – On Friday Sean played an under-14 match for his school against Cootehill, in Cootehill. Virginia won by four points; Sean played centre-forward and scored two goals. At the end of the match, in making a block, he took a boot full in the face and apparently was unconscious for a couple of minutes; his nose was pumping blood. He recovered well, with no apparent ill effects except a sore nose.

15/12/05 – Sean played in the Cavan schools under-14 Gaelic football final at Breffni Park yesterday – I went along. Unfortunately, Virginia seemed to freeze on the day, and Bailieborough beat them comfortably. By all accounts this is a very good Virginia team, and they won all their previous matches easily, so it was a pity. Sean started at full-forward, did well and scored a goal, but was moved to midfield, where he made less of an impact. Also, a penalty was missed at a crucial time that Sean wanted to take and would probably have scored. 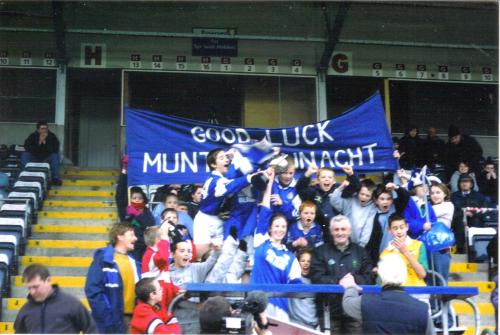 7 responses to “Sean and Gaelic football 2”