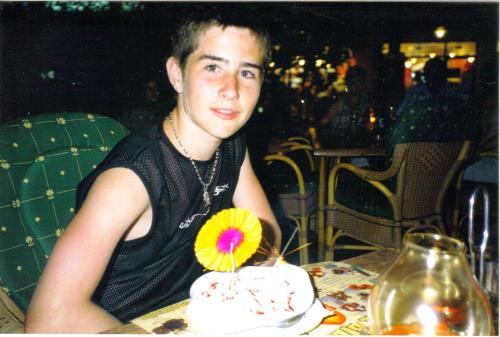 Sean made loads of friends, and had two girlfriends – Karen from Wales in the first week and Jenni from Belfast in the second. It seems that he has had relationships with girls before, including one at the Killinkere summer camp earlier in the summer, but for Pauline and me this marked something of a transition in his life and ours. His friends were mainly Irish and English, and he spent an awful lot of his time hanging around with them at the pool and on the beach, and going to the KFC or the arcade. Often we hardly saw him for hours on end.

His friends included Kenny from Belfast, James from Mayo, Shane from Galway, and Tyson, Tiam and Saige from Kent. Susanna was friendly with Caroline (Kenny’s sister), a little English girl named Elody (with whom she duetted on ‘Hopelessly Devoted to You’ on a karaoke night), and one or two others. Sean has been chatting with some of his friends on MSN since coming home. Pauline and I got quite friendly with some adults, mainly Irish but also English.

I played some pool with Sean and others. On the last night, we were due to catch a bus from the hotel to Palma at 3.30 a.m. Pauline and Susanna had gone to the apartment and I was drinking a beer on the plaza after the entertainment had finished, listening to the conversations from surrounding tables. Sean came and asked me to play pool at the restaurant/bar across the road.

A cheery group awaited me there, including Phil, the father of Tyson et al., their mum and various boys and girls. Phil, a jovial character, immediately bought me a pint, and a lot of doubles pool games were played. Pauline arrived too. Steve, a boy from Baldoyle, was a good player. Sean had improved a lot. I variously played doubles with him, Tommy from Mayo and Brian from Galway, who unaccountably was wearing a Wexford jersey. We won more than we lost.

At the bar, two drunken Galwaymen started to sing IRA songs; Phil (who described himself as ‘bladdered’) bought them a drink and sat chatting to them for ages, which was a good way of shutting them up. The bar closed around 2, and we didn’t have much time to kill before the bus. A good night.