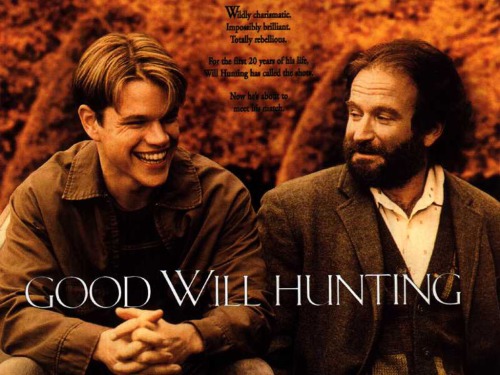 Sean liked film. He hadn’t gone to the cinema all that often since he was a child, but he watched a lot of films on television, often with his mum and me, or on the computer. He liked to discuss them afterwards (or sometimes while they were on – a practice that had to be curbed). He often drew attention to technical aspects, such as very long tracking shots; he noticed things that most people wouldn’t (without being taught them in a media class). I think he could have had a career in film-making – he had a great eye.

Sean was an enthusiastic admirer of certain actors, such as Robert de Niro, Al Pacino and Daniel Day Lewis, and would watch anything with one of them in it. Conversely, he had a deep and abiding loathing of Clint Eastwood. He wasn’t very keen on rom-coms either.

When I try to remember films that Sean particularly liked, ones that pop into my head are The Big Lebowski, Good Will Hunting, The Shawshank Redemption, The Deer Hunter, Donnie Darko, American Beauty, Bob Roberts, Scarface … there were many others.

He thought it was very important for a film to have a good soundtrack, and that Forrest Gump was unbeatable in this respect. I remember he remarked on the clever use of Dylan’s ‘All Along the Watchtower’ in American Beauty (as opposed to Hendrix’s classic but over-exposed cover version).

The following are some tracks from soundtracks of movies he loved.

5 responses to “Sean and film”