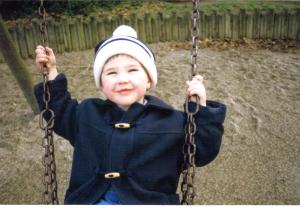 Glancing through my old diaries, I see a lot of stuff about Sean, of course. Christmas 1993, for example … Susanna was six weeks old; she and Pauline were in the hospital – Pauline had gall-bladder problems. Sean was two; he and I were in the house in Dublin with my father, who was visiting.

Sean woke me at 4.20 talking about spiders downstairs, and insisted that he come downstairs with me for his milk. He then insisted that I turn the kitchen light on (I’d been hoping he wouldn’t see his present). When he saw it he said ‘My slide!’ and was delighted with it. I let him play on it for a few minutes and then took him back to bed.

We got up around 10 and Christmas Day proper began. I rang Pauline – she would be able to come home for a few hours as she had hoped. I cooked a big dinner, helped by Sean – he always insists on helping with the dinner these days. Roast chicken and potatoes, cauliflower in white sauce, Brussels sprouts and parsnip. Carrot cake to follow.

Pauline got home (in a taxi) with Susanna just before I served it up. Sean wouldn’t eat any; my dad and I had too much and left a good bit. Pauline had had her low-fat Christmas dinner at the hospital.

[We spent a good bit of time at the next-door neighbours’; Pauline and Susanna went back to the hospital.]

Sean, on being brought home, screamed the house down while I was trying to get him to bed.

The usual sort of morning, making breakfast and keeping young and old amused. In the afternoon I took Sean in the buggy to the hospital. I had hoped to leave him with my dad, but he made too much of a fuss. He fell asleep in the buggy on the way (it took me about 35 minutes to walk to Mount Carmel) and only woke up when we were nearly home, to ask ‘Where’s the hospital??’ …

… We had pasta with the leftover sauce from Christmas Eve. My dad and I drank a can of lager each, and we had a quiet night in. Sean was awake till 12.30 or so, finally falling asleep on the beanbag.