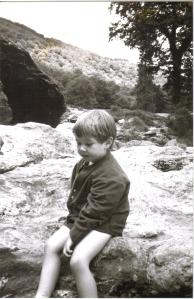 Sean was a deep thinker, but was not particularly politically minded. He never voted in his life … the only time he could have voted was in the second Lisbon referendum, but he hadn’t registered. He said he would register in time to vote at the next general election.

At secondary school, history was his favourite subject. Early-twentieth-century Ireland interested him particularly … for his Leaving Cert he did a project on the IRA flying columns of 1919–21.

He admired Michael Collins and knew a lot about de Valera, and, in particular, the Irish Free State’s role in the evolution of the Commonwealth in the 1920s and 1930s (much more than I did, as it has generally been overlooked). He sometimes spoke about this. He didn’t sympathize with the modern ‘Republican Movement’.

Sean’s view of world affairs was strongly influenced by the documentary Zeitgeist films (especially the first one), and he would sometimes hold forth about the flaws in the Federal Reserve and that kind of thing. He was intelligent and persuasive, and claimed to have brought many of his Cavan friends round to his way of thinking on these matters. He wanted his mum and me to watch the first Zeitgeist with him … something we never got round to, though we did see part of the third one with him a few months ago.

Sean’s concern, really, was with people … he could never have been an ideologue. He resented injustice, and didn’t like to see people being bullied, abused or oppressed … at school, we hear, he often intervened in what he saw as cases of unfair treatment. He sympathized instinctively with the underdog, and had a gift for being able to see the essence of the person rather than their age, race, nationality, social class, etc. He had a good heart.

18 responses to “Sean and politics”