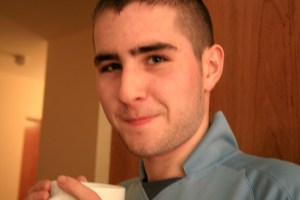 Chronologically, the next musical ‘big thing’ in Sean’s life after Kings of Leon and Against Me! was Elliott Smith. This was a departure for Sean … more moody and introspective than his usual taste.

He loved the movie Good Will Hunting (as I do) … it was one of his all-time favourites. There are several Elliott Smith songs on the soundtrack, which work very well. This, I presume, is what first drew Sean to Smith’s music.

For a while, Sean played Smith an awful lot, not only in the office but on the laptop in the sitting-room on a Friday night, say, when Pauline and I were relaxing and drinking wine. We got an overdose, and the songs started to seem dreary and ‘samey’ (‘Oh God, not Elliott Smith again!’). We expressed this to Sean, diplomatically, but he was always a proselytizer for music he believed in, and didn’t discourage easily. He thought it would grow on us.

In fact I think it was all a bit downbeat for Sean’s nature, as he quite soon moved on to the livelier world of reggae. Sean may have experienced some teenage angst from time to time, but he was basically an exuberant person. In a letter one of his school friends wrote after his death and placed in his coffin, she said ‘You were way too happy to be emo!’

Listening again to some of the Smith tracks Sean liked, I can certainly see their appeal: ‘Between the Bars’ and ‘Miss Misery’ are especially wistful and beautiful. More future tear-jerkers to add to a very long list; Good Will Hunting will always be unwatchable, I think, without a decent supply of tissues.

We miss you, Sean … your mum, Susanna, Clio and me, and all the others.