To Sean … the first day of your life 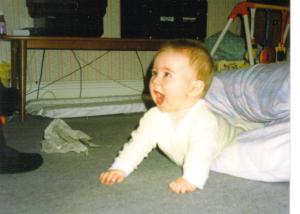 We decided to try to have a baby while on holiday in Turkey in September 1990; Sean was conceived in London, where we lived at the time, the following month.

When I look to the entry for Sunday, 28 July 1991, I find that the day was ‘beautifully hot’. We had moved back to Dublin in March, as we wanted to bring up our child in Ireland. I woke at 10 o’clock that morning, and Pauline told me that she’d been having pains … we decided around 12 that this was probably the real thing.

I rang for a taxi … the driver, I noted, was a ‘carefree gobshite with four children who made jocular remarks about what men have to go through and so on, which wasn’t what Pauline needed to accompany her contractions’.

We had a long day at the hospital (The Coombe). For a time nothing much happened, and we thought Pauline might have to go home again … we hoped she wouldn’t.

My diary gives a blow-by-blow account of developments. I was with Pauline when Sean was eventually born at 11.42 pm – a forceps delivery. The first thing I really noticed about him, apparently, was his right ear. I wrote ‘To our surprise, it was a boy’ … for some reason we’d been expecting a girl.

I also wrote ‘We were both absolutely thrilled. We both held and cuddled him; he was weighed and washed.’ Pauline swore afterwards that Sean had smiled at her in his very first moments. I continued to hold him while she was looked after, then I went out and made phone calls to spread the good news.

I had a cup of tea and sat with Pauline for a while … ‘then, around 1.45, I left and got a taxi home. The driver was a paternity enthusiast whose wife had had a baby last year, so we spoke about these matters all the way. I had some tea and fig rolls, and watched part of a silly Danny Kaye movie. Went to bed, too happy and excited to sleep.’

Sean died on a Sunday too. He liked this song very much, and used to play it on the other computer. I like it as well … its message of love and boundless potential seems poignant now. But Sean lived and loved well. These posts are to celebrate him … not to mourn him.

Filed under Death, Memories, The music of what happened

26 responses to “To Sean … the first day of your life”