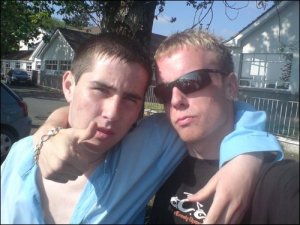 Terrible name for a band, as I mentioned to Sean more than once. Also, their ‘Thrash Unreal’ is one of the best rock & roll tracks of all time, in my opinion, but is virtually unknown … the lousy title hardly helps. Anyway, that’s a discussion Sean and I can’t have now.

I think his friend Aaron F introduced Sean to Against Me! a few years ago. He started playing ‘Thrash Unreal’ – a song about a recovering junkie – on the other computer while I was blogging, or whatever, on this one. I couldn’t believe how good it was. Some of their other stuff is very good too. Sean played them a lot.

They are, I suppose, an anarcho-punk group or some such. They appear to have a radically non-commercial or anti-commercial philosophy; this (as well as their penchant for naming weakly) may have contributed to their lack of commercial success. There seems to be an Irish influence … from some of their allusions I would have assumed they were from Boston rather than Florida.

Sean liked their attitude as well as the raw, basic music and Tom Gabel’s strained and passionate vocals. They were one of the handful of bands that made a really big impression on him.

Tagged as Against Me!, Sean O'Brien, Thrash Unreal