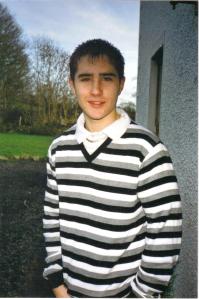 After Nirvana, Radiohead were the next big thing in Sean’s musical world, as I recall. One weekend we were visiting his cousins in Portstewart, Co. Derry, and Sean rang me from a record shop to ask whether Radiohead were a good band. I said I didn’t know much about them, but thought they were.

He then bought the My Iron Lung CD, and would later talk about walking along the sea front at Portstewart and listening to it on headphones, amazed at how good it was and off in a world of his own. That was a vivid memory of time and place for him.

We got OK Computer and Sean also downloaded various tracks … My Iron Lung continued to be his favourite, and we often played it in the car right up to his death. Some Radiohead songs will always remind us of our wonderful brother and son.