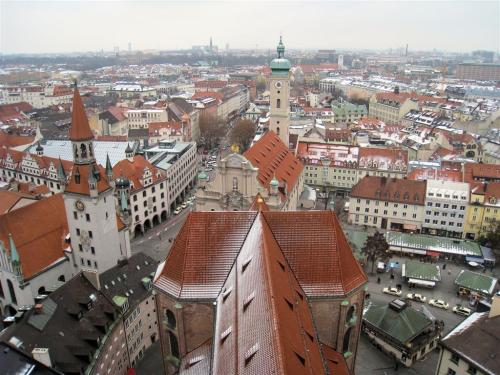 I posted this on MyT last December … I repost it here (without the links) in honour of the fact that myself and the same three friends will be going back to Munich this December, DV.

Three of us flew out from Belfast early on Saturday. Met up with the English member of our quartet, who had flown from London, at Munich Airport. 45 minutes on the train, then a short walk on snow-covered streets from the station to our hotel.

One of our number knows Munich quite well (I’d been there just once before, in 1988), and had worked out an itinerary of sorts … much of which revolved around finding and dispatching the best local beers. So, on the first day we did a lot of that kind of thing. Falafels for kebab-shop lunch; dinner at the Hofbräuhaus; between times walking round the city, dropping into bars, shivering in the bitterly cold wind and trying not to step into the cycle lane.

Late in the evening we arrived at a ‘yodelling bar’ expecting a bit of fun, only to find that the yodelling was done in a private club upstairs. Undaunted, we befriended a nice young couple from Oxford, added them to our round and bought them so much beer that they must have had serious hangovers the next day.

We certainly had. Four middle-aged men had made the rookie mistake of drinking too much on the first night. Will we never learn? We trudged to the station for breakfast, and on to the sleekly impressive Pinakothek der Moderne design museum.

Next was a walk in the Englischen Garten, and the bizarre sight of skilled surfers on a stationary wave of the narrow river (in front of the ‘no surfing, no bathing’ sign … I’m told thousands swim there in the summer). Then a restorative beer and lunch in the Ratskeller, and a bit of shopping-for-presents research (during which a punk girl accosted several men, including me, in the men’s toilet of a large department store … I made my excuses and left).

We had a couple of gluhweins to keep out the cold, while watching adults and children skating on a city-centre rink. Later, at the Tollwood (a vast winter market/festival), we discovered that feuerzangenbowle is even better than gluhwein – a dash of rum is added.

Passing a beautiful old church, we heard singing coming from inside, and paid to enter … a concert of Christmas carols by a wonderful choir of men and children, with organ and violin, had just started. That was one of the highlights.

The main event on Monday, apart from the obligatory present-shopping, was a visit to the Hunting and Fishing Museum, which was fascinating. As well as the stuffed animals, birds and fish there are hundreds of old guns, many dating from three to five centuries ago. The craftsmanship these display is amazing. Apparently each gun was required to be a beautifully carved and inlaid masterpiece as well as a technological wonder of its time.

Along with a middle-European fascination with hunting and its accoutrements, which sometimes hints at a mystical union of man and beast, the museum showcases a certain Gothic quirkiness of the German mind. An old painting of a hunter kneeling before a magical deer; caricatures of sly talking foxes … most of all, a section where some master vivisectionist appears to have gone insane.

As well as a hare having sex with a hen, we see here a collection of wolpertingers (bizarre amalgams of parts of various animals and birds – a winged fox was the most conservative). I didn’t realize till later that these are a Bavarian tradition … apparently innkeepers used to try to trick gullible visitors into searching for such ‘beasts’ in the wild.

I lit four candles in a church (one for each member of my family) – a beautiful custom that was replaced by electric ‘shrines’ in Ireland decades ago. We climbed the 306 steps of its ‘Alten Peter’ tower, not without complaint – the photo above is a view from the top – then did our shopping and finished the day with another visit to the Tollwood and a few more feuerzangenbowles.

The people of Munich are friendly and outgoing … typical was the young woman who stopped to offer help on the first day, having noticed the four of us standing on a street corner pointing in four different directions. It appears to be a civilized, cosmopolitan city where hordes of people enjoy inordinate quantities of food (especially pigmeat) and drink in public, without becoming either troublesome or overweight. Male and female stallholders in the markets drink beer while they work.

The police presence is barely noticeable. There is a genuinely ‘vibrant’ (overused word) air to the place. Although I heard some English and Irish voices, there were surprisingly few tourists from outside Germany. The euro coins I received as change were invariably German ones.

It’s a very German city … not ‘multicultural’ except for the sizeable Turkish community. (The Turks are a community … they appear to accommodate to German ways but keep their own culture and do not ‘become German’: that makes sense to me.) Notwithstanding the widespread myth that English is a Europe-wide second language, many people speak no English at all (of course there is no reason why they should).

The city appears to be comfortable with its Catholic heritage, and ‘PC’ notions are nowhere evident: Munich loves Christmas and Christmas loves Munich.

So, a great weekend in a winter wonderland. I’ll definitely go back, DV.

Filed under Anecdotes, The music of what happened, Uncategorized, Wildlife